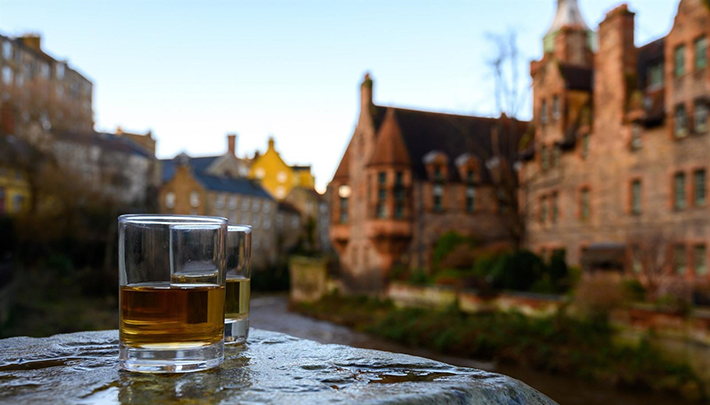 Scotland is the home of the beautiful game of golf.  The game of golf which we all play now had its origins in 15th Century Scotland at the iconic St Andrews Old course.  Playing there today is teeing off in the footsteps of history.  Scotland is also the home of fine whiskey and the story goes that both of these amazing legacies are intrinsically linked.  Legend has it that the 18-hole golf course was invented because it takes exactly 18 shots to drink a fifth of Scotch whiskey and drinking only one shot at each hole meant that the golf and the whiskey ended at the same time!   We have yet to test the theory, but at Henry Golf Tours we have incorporated amazing golf courses and playing with tours of some of Scotland’s Whisky makers as part of our customised package tours of Scotland.  Both the whiskey and the golf always get excellent reviews.

A tour of a Scottish Whiskey distillery is a revelation as you learn of the time, expertise, care and attention that goes into producing the wee dram.  Most of Scotland’s distilleries have been producing whiskey since the early 1700’s.   Laying down casks of the elixir to mature over years. There are over 120 active working distilleries in Scotland, from the Highlands, the Lowland to Campbelltown and Islay.  Each area and each distillery have its own unique flavour due to the water sources, presence of peat etc and the local method of refining the alcohol.  While some are peated, heavily sherried or have a salty tang from the sea, others are fresh, light and grassy. The Highlands is home to some of the oldest distilleries and their tasting tours are now almost (almost!) as important as the whiskey itself. Explore Highland distilleries to taste the region's distinctive malts and blends. You'll find some of whisky's most famous names here - and some of its most fiercely individual spirits.  incredible golf nearby, it is the dream golf destination holiday for any keen golfer.

These days, almost all whiskeys are aged in wooden barrels. The wood absorbs some of the more unpleasant aspects of the distilling process and, in return, imbues the liquid with flavours unique to itself. Sometimes old port barrels are used to infuse the whiskey with that particular residue. The harmony between whiskey and wood has existed for years. But as the wood is porous some of the precious liquid will evaporate during the critical aging process.   As this liquid evaporates to the heavens, it has been called the ‘angel’s share’.   Drunken angels aside, this evaporation actually assists the maturing and the smoothness of the final whiskey.

There is no doubt that two of life’s greatest pleasures, golf and whiskey come together in a Henry Golf tour of the Scottish Highlands.   Here in the unspoilt, wild and beautiful landscaper where both golf and whiskey began, you can have a dream golf trip that will bring warm memories for years to come.

Categories
Most Recent
View all posts
Golfing in Ireland
Get in touchPhone +353 87 360 7864
Email info@henrygolf.com
Skype ID henrygolf1
Pay an invoice >